Our research and project are about the housing issues and maintenance of the Red Hook Houses, the New York City Housing Authority’s second largest public housing project in the city.  The vision is to create a repair-focused training system specific for NYCHA residents, guided and led by women. We proposed starting a repair-focused vocational training program specific for NYCHA residents, guided and led by women. This would allow women with a quick and safe emergency solution to alleviate housing issues while waiting for the response from NYCHA and, for those interested, potentially serve as income-generating skills needed for a future career in home repair.
Repair Brigade
A Vocational Training Program
for Women Living in NYCHA’s Red Hook Houses
System Design
Team Project | 2019 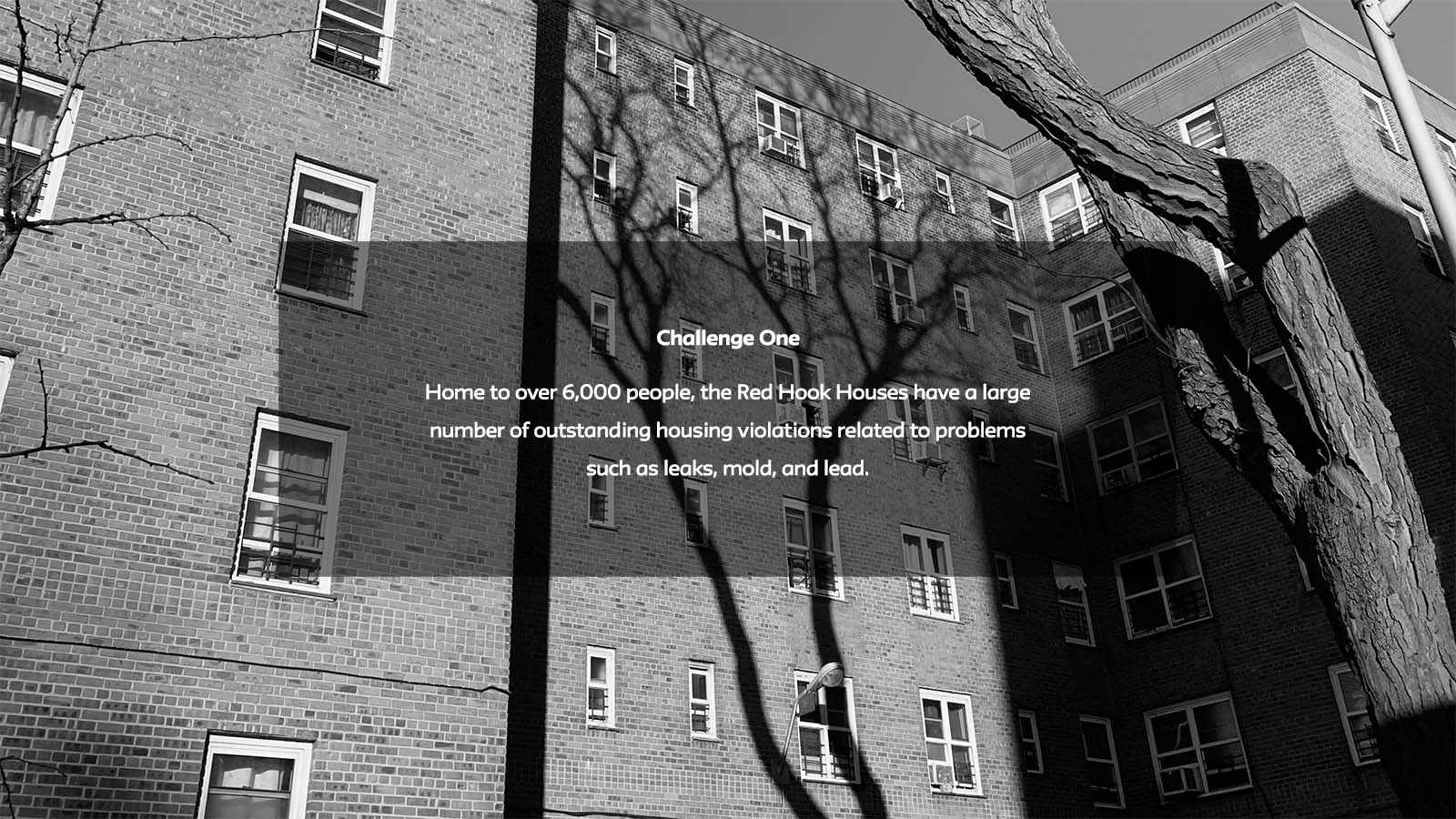 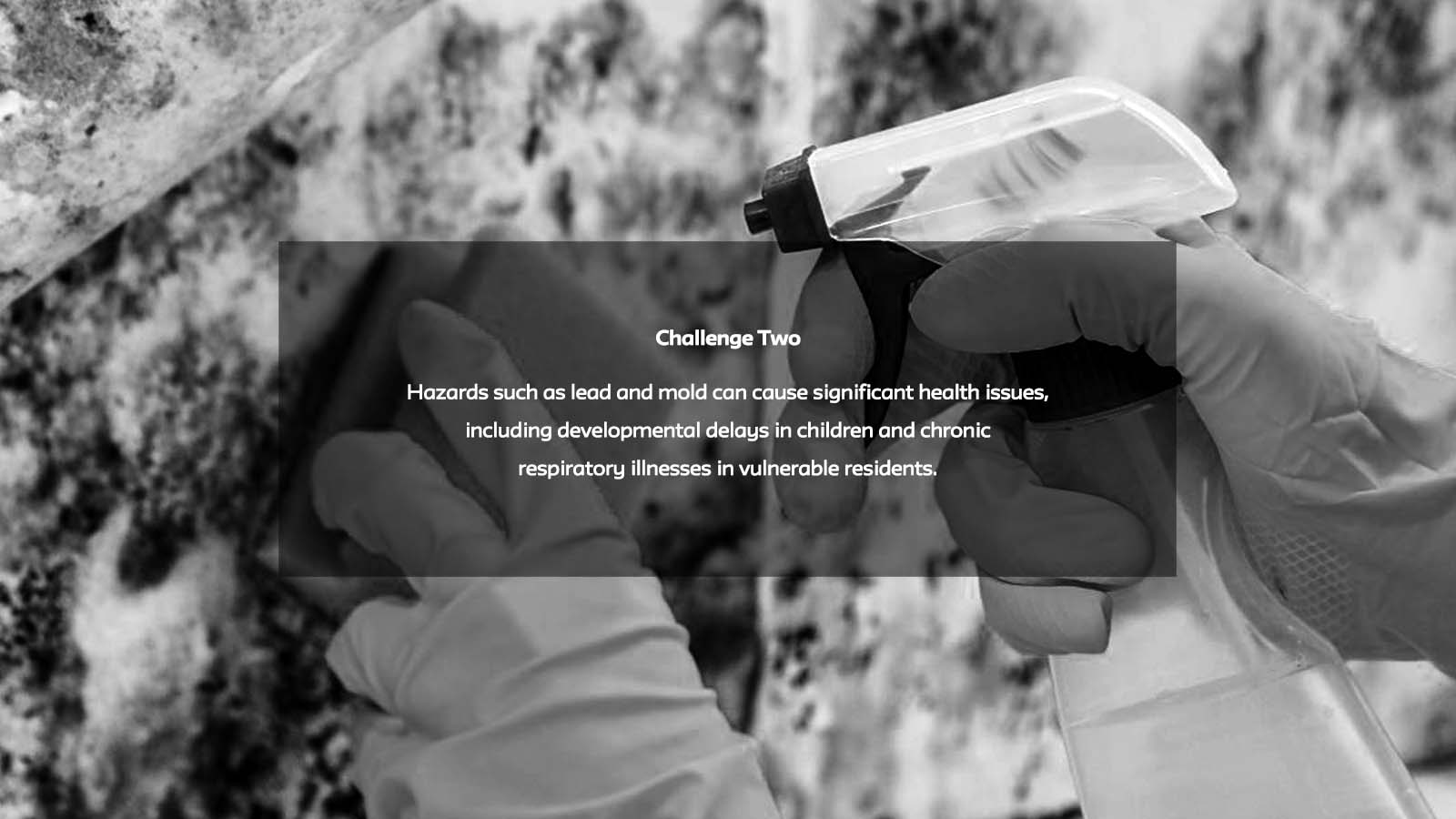 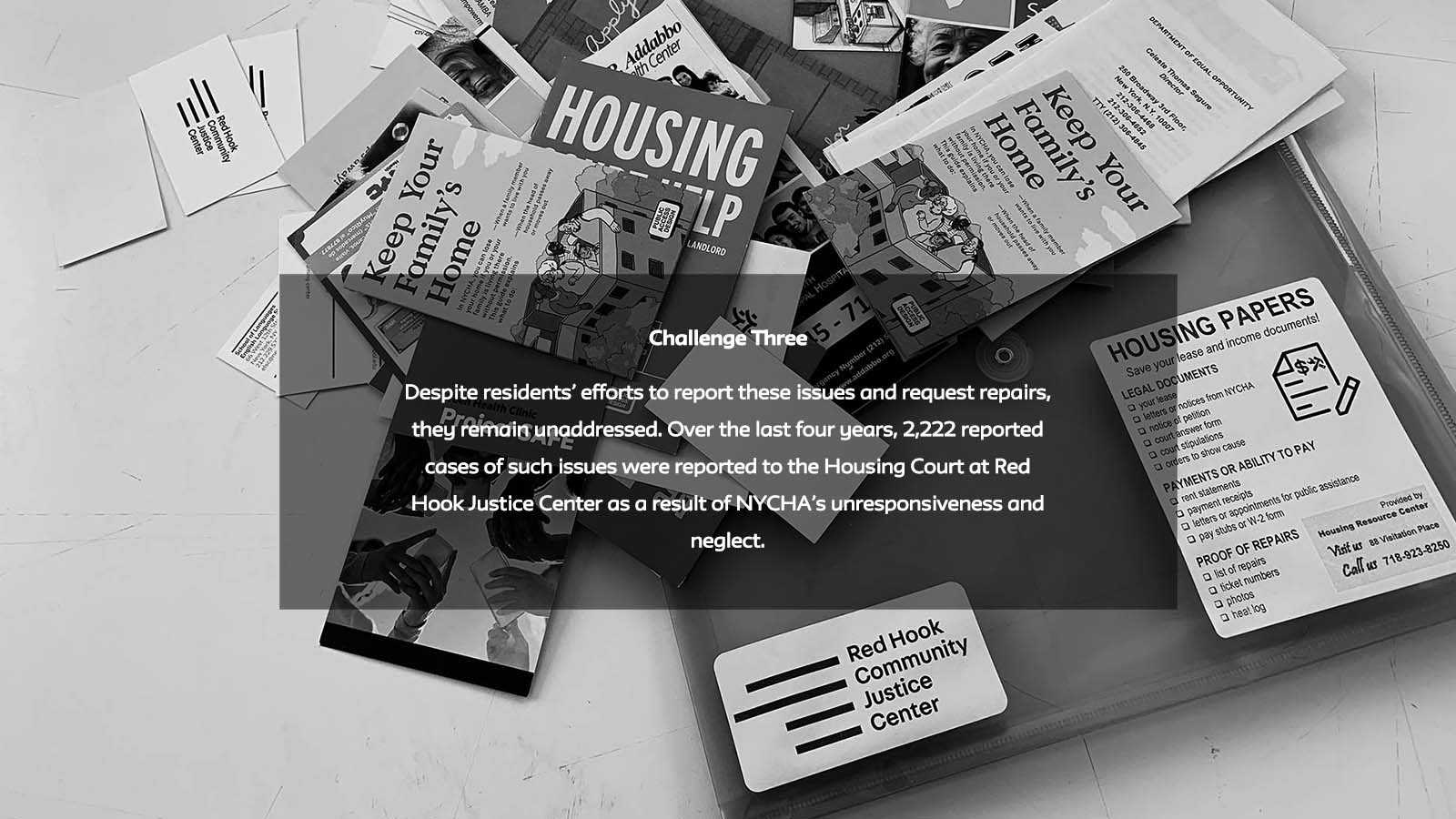 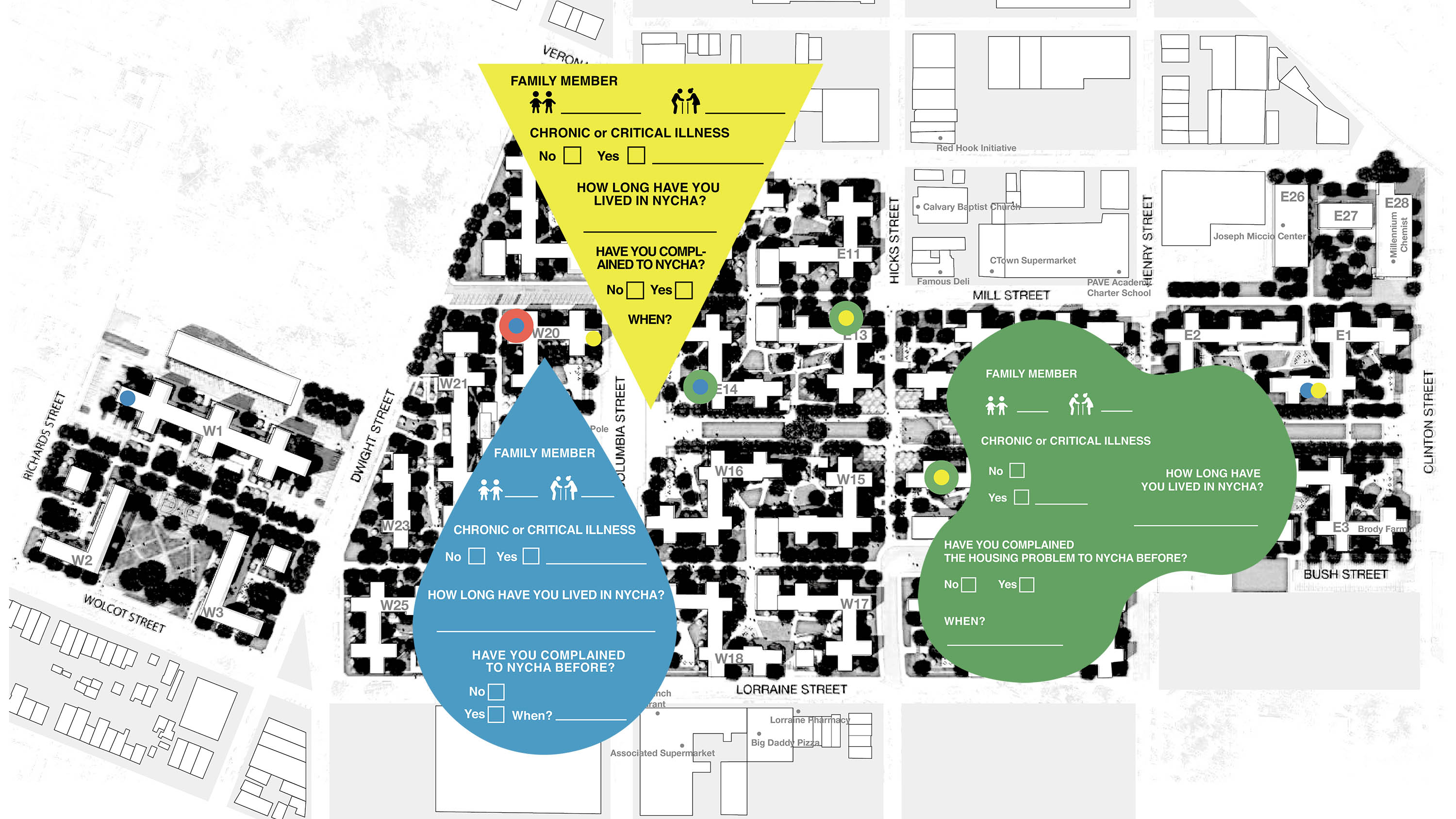 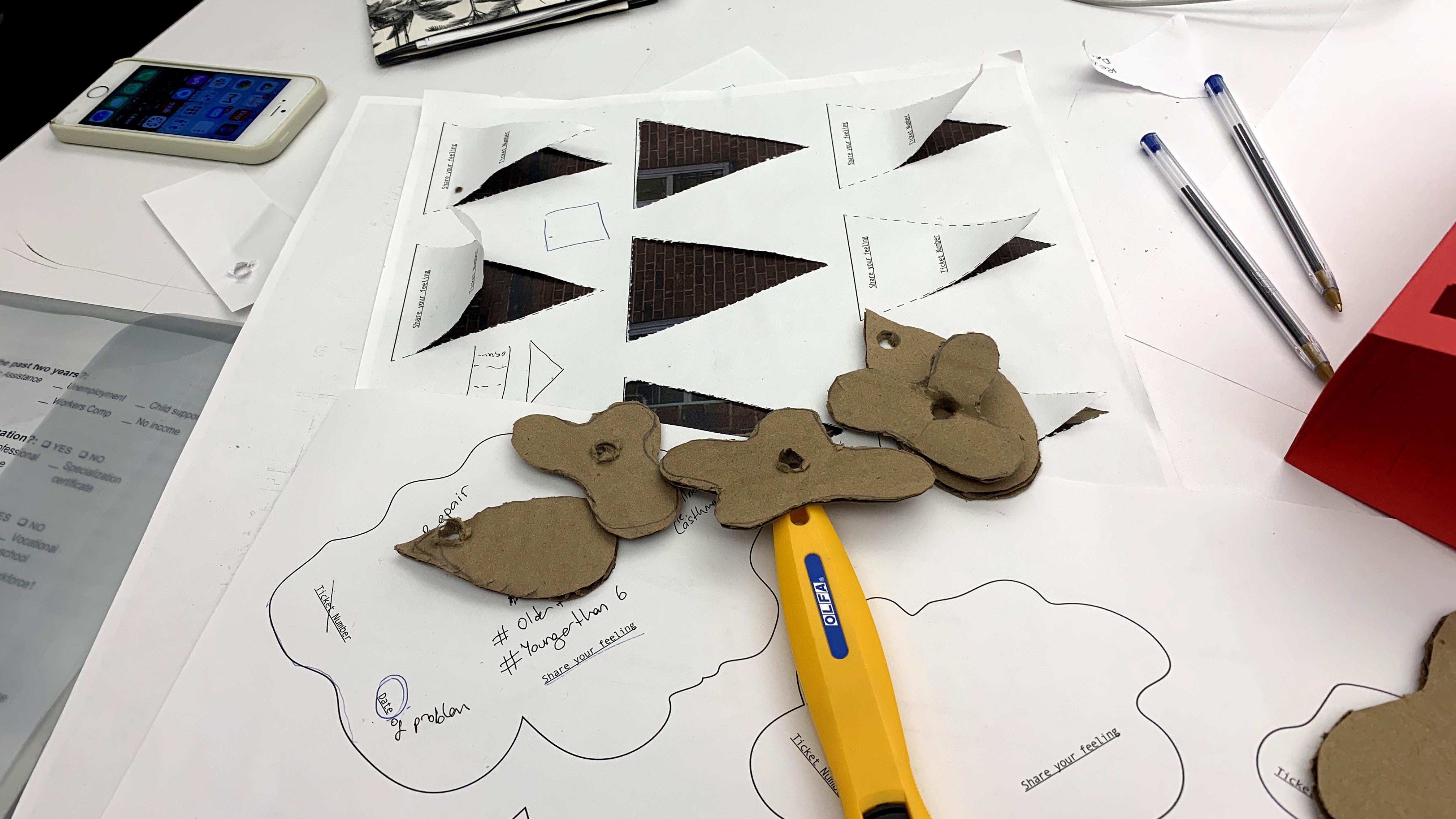 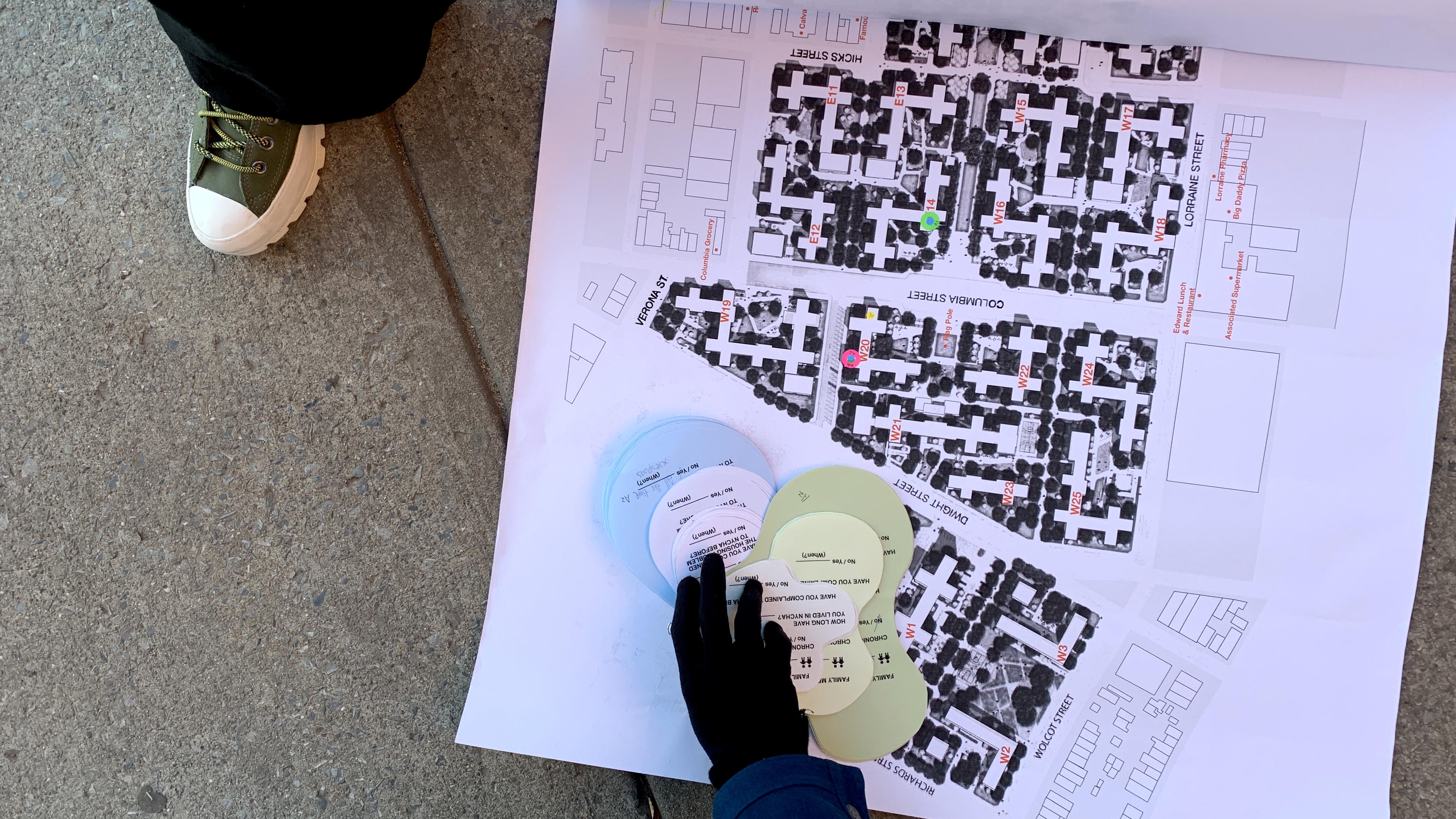 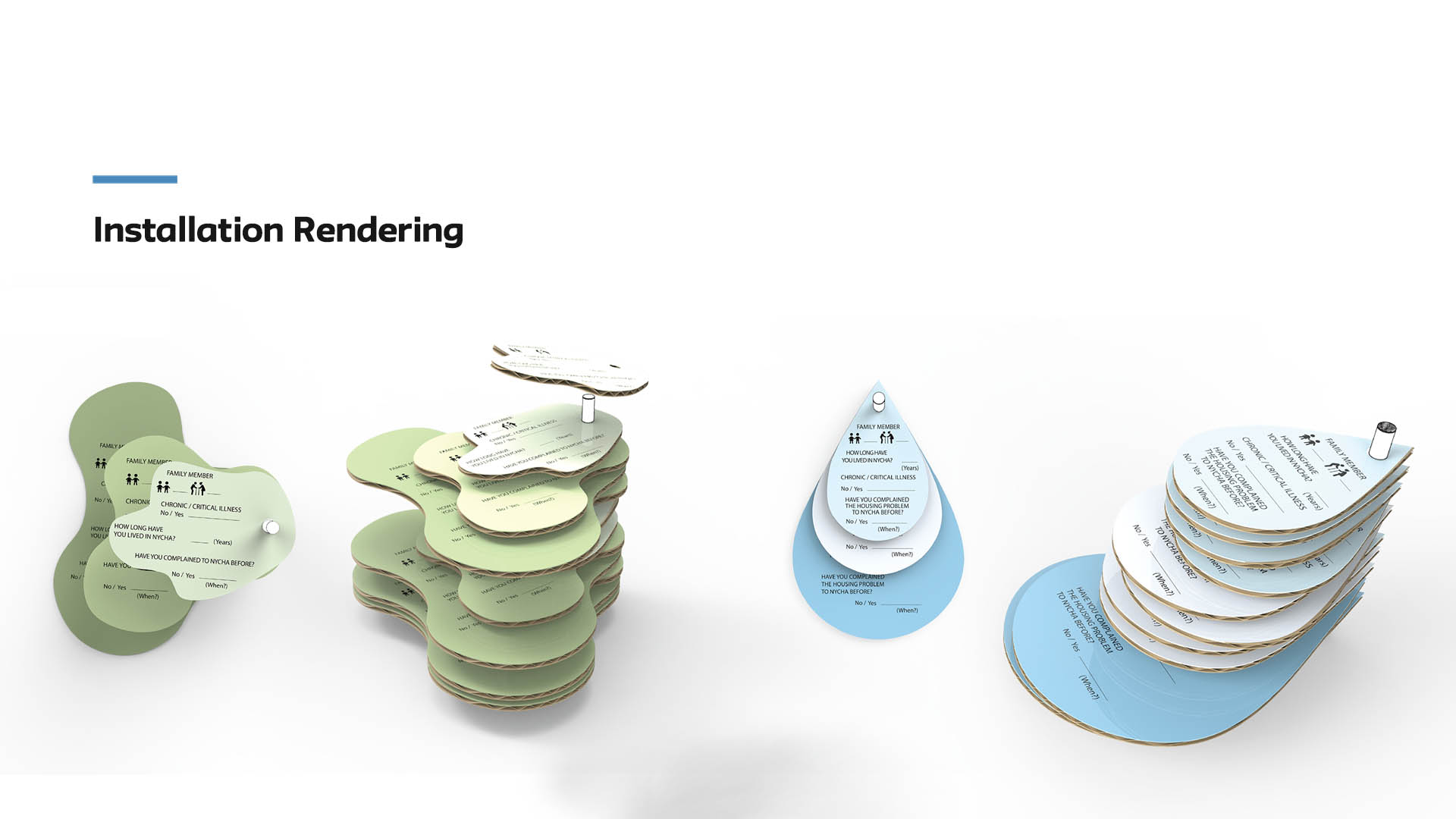 Our Research
To better understand the issues residents were facing in NYCHA’s Red Hook Houses, it was critical for us to mitigate the concern of uncertainty brought by outsiders like us, and let them feel more comfortable to share information with our team,  therefore, we conducted open-ended interviews by using a map and series of prompts we designed.

We imagined such an installation could serve a dual purpose not only as a research tool, but as an advocacy tool residents could use to push NYCHA to react more quickly to their requests. Next, we set up a map in the public area where participants could not only mark their locations, but also use two layers of color to mark:
1-the types of housing problems they were experiencing;
2-whether they can repair it by themselves.

From this research, we uncovered a few key insights: 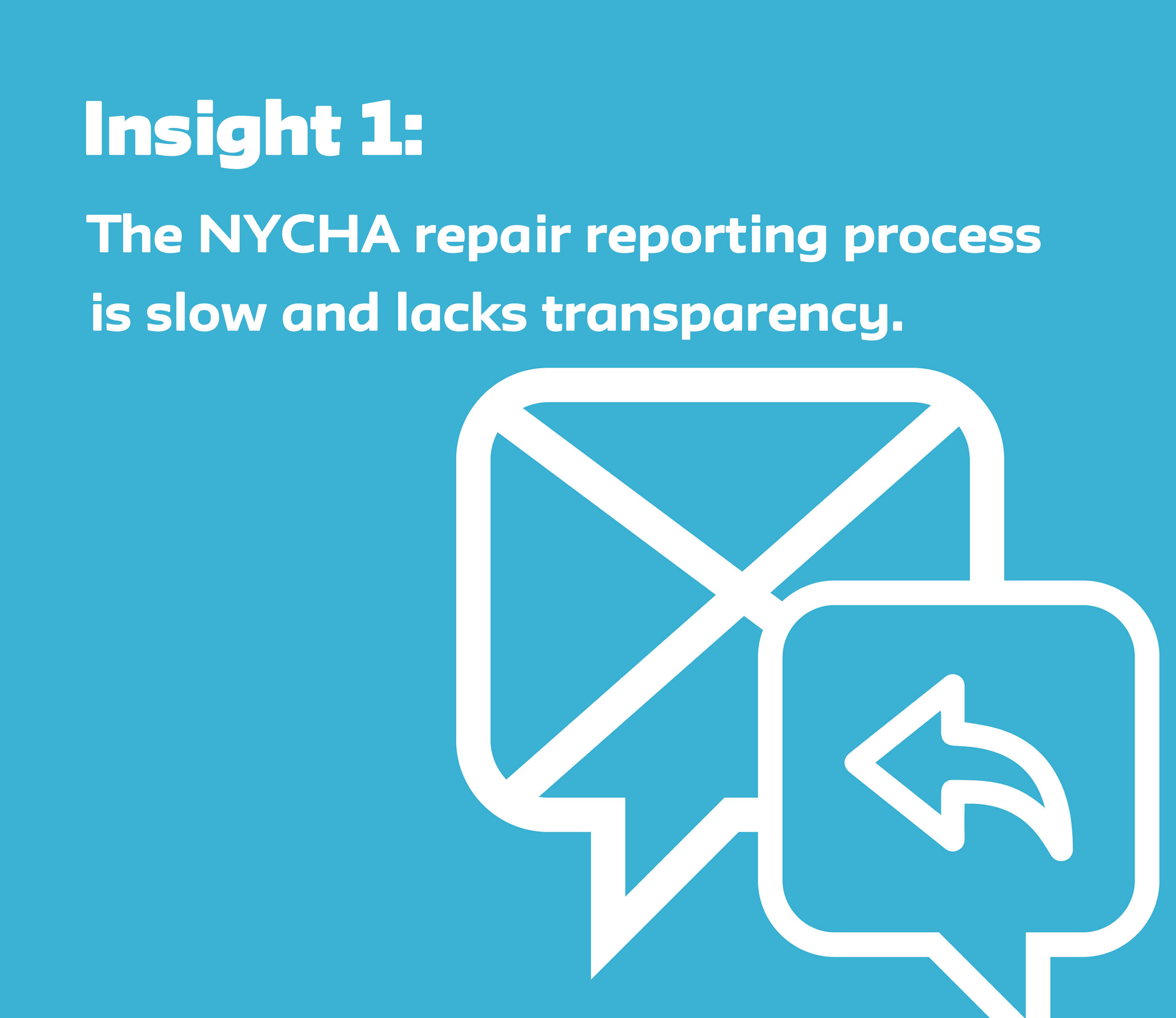 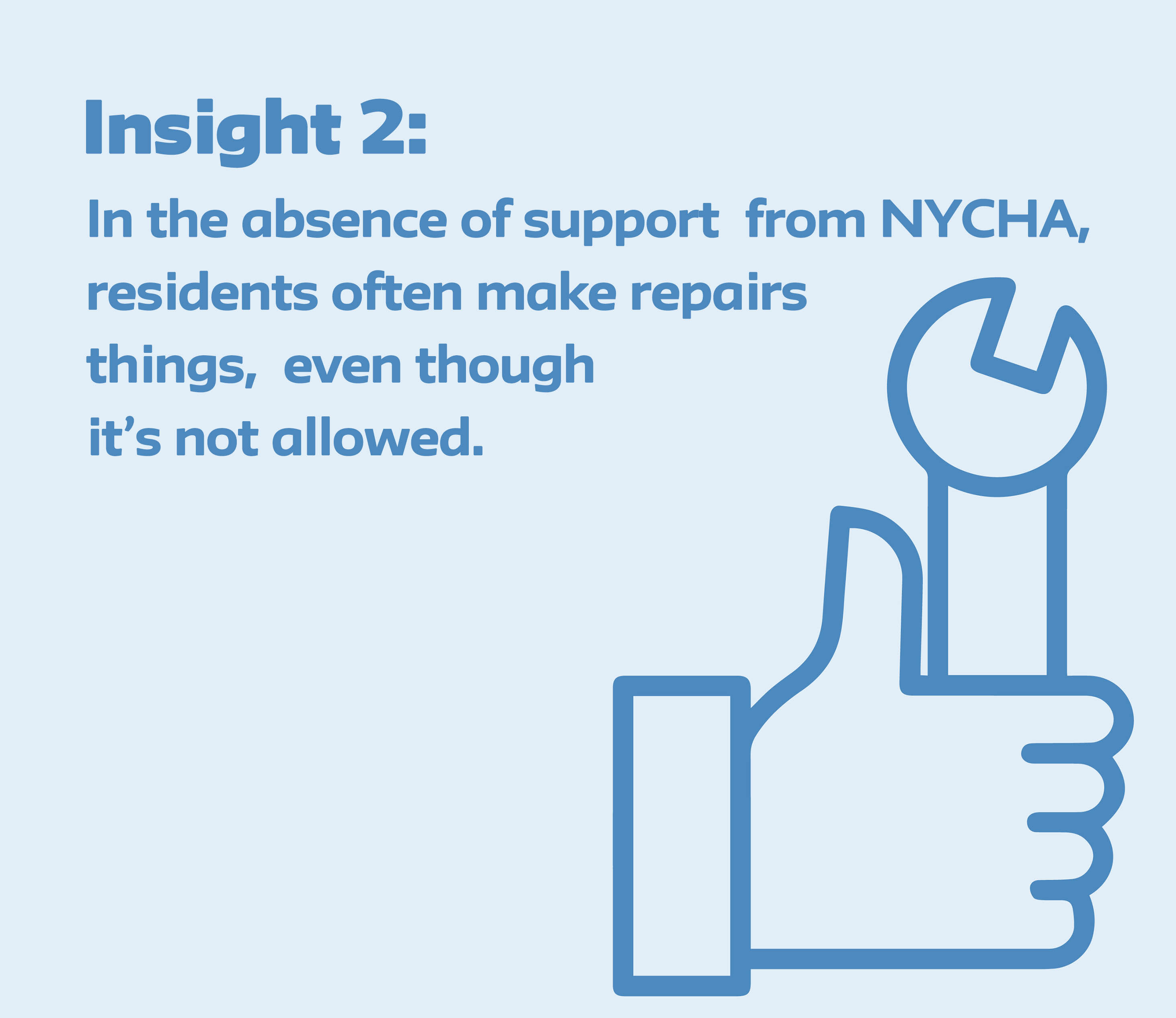 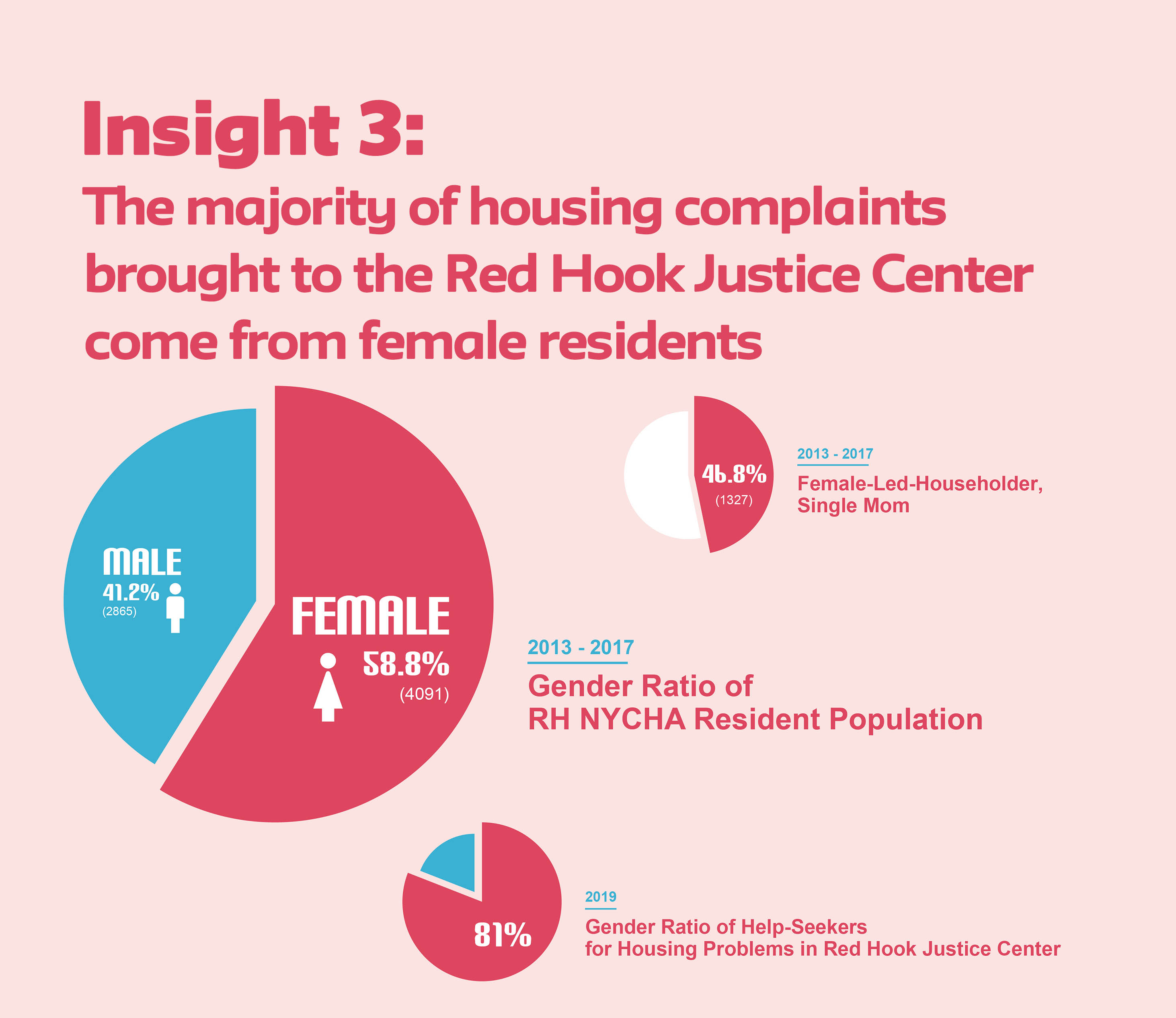 While residents can report housing problems to NYCHA by opening tickets via the official NYCHA APP, they seldom get timely responses. NYCHA has been known to close tickets even when their response did not actually address the issues in the complaint. There is also no transparency for residents to know the status of their complaint.

As we learned through our interviews with residents and the Red Hook Justice Center, some residents do simple repairs at their house, including repainting walls to prevent chipping paint and potential lead exposure. Technically residents are not allowed to make such repairs on their own, but some do so anyway out of sheer frustration with the inefficient ticketing system.

Even though the gender ratio of the NYCHA population is split evenly between men and women, 81% of housing issues are brought to the Red Hook Justice Center by women. 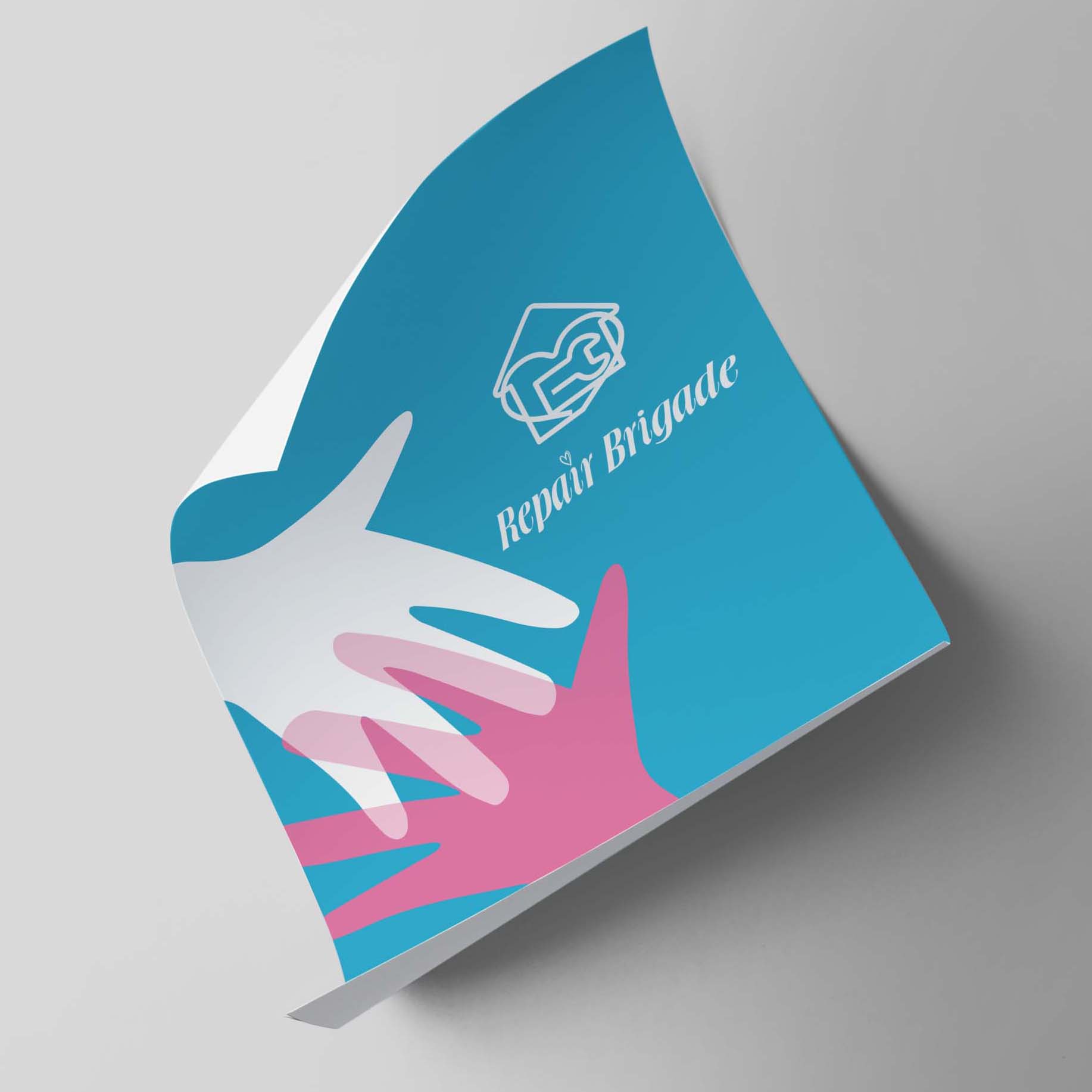 Our Proposal
‍We knew that any solution we proposed would have to focus either on pushing NYCHA to react more promptly with increased transparency or enable residents to work around NYCHA to get their issues resolved. We would introduce this training program during the monthly housing meetings held by the Red Hook Initiative (RHI) so that, when residents file complaints about their housing issues, they would also learn about the new training program.

With 4 weeks sessions(4 -16 hour in total) that fit with women’s schedules, the training program would focus on different subjects including mold abatement, lead abatement, pipe fixing and so forth. Finally,  as the program is designed for women who are heads of their household, child care services would be provided.

The goal is not to have women residents providing 24/7 maintenance, but to support them by making already-existing resources more visible and accessible. These trainings also relate to the right to repair movement and could even be used to open up broader discussions among residents and local nonprofits to imagine other alternative resident-led systems within NYCHA. By being better equipped to care of their surroundings and more involved in the decisions affecting their housing, residents may feel a deeper belonging where they live as well. 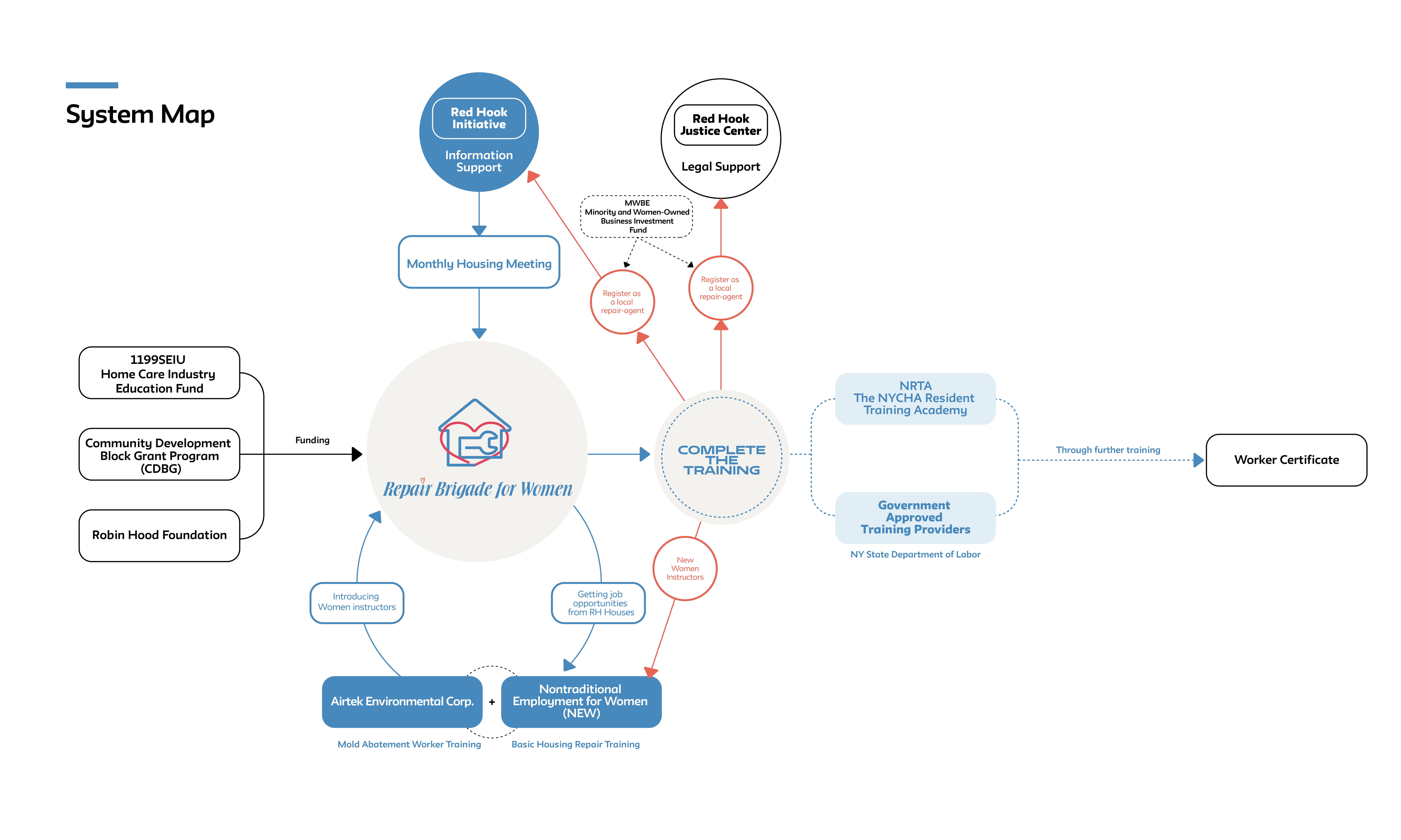 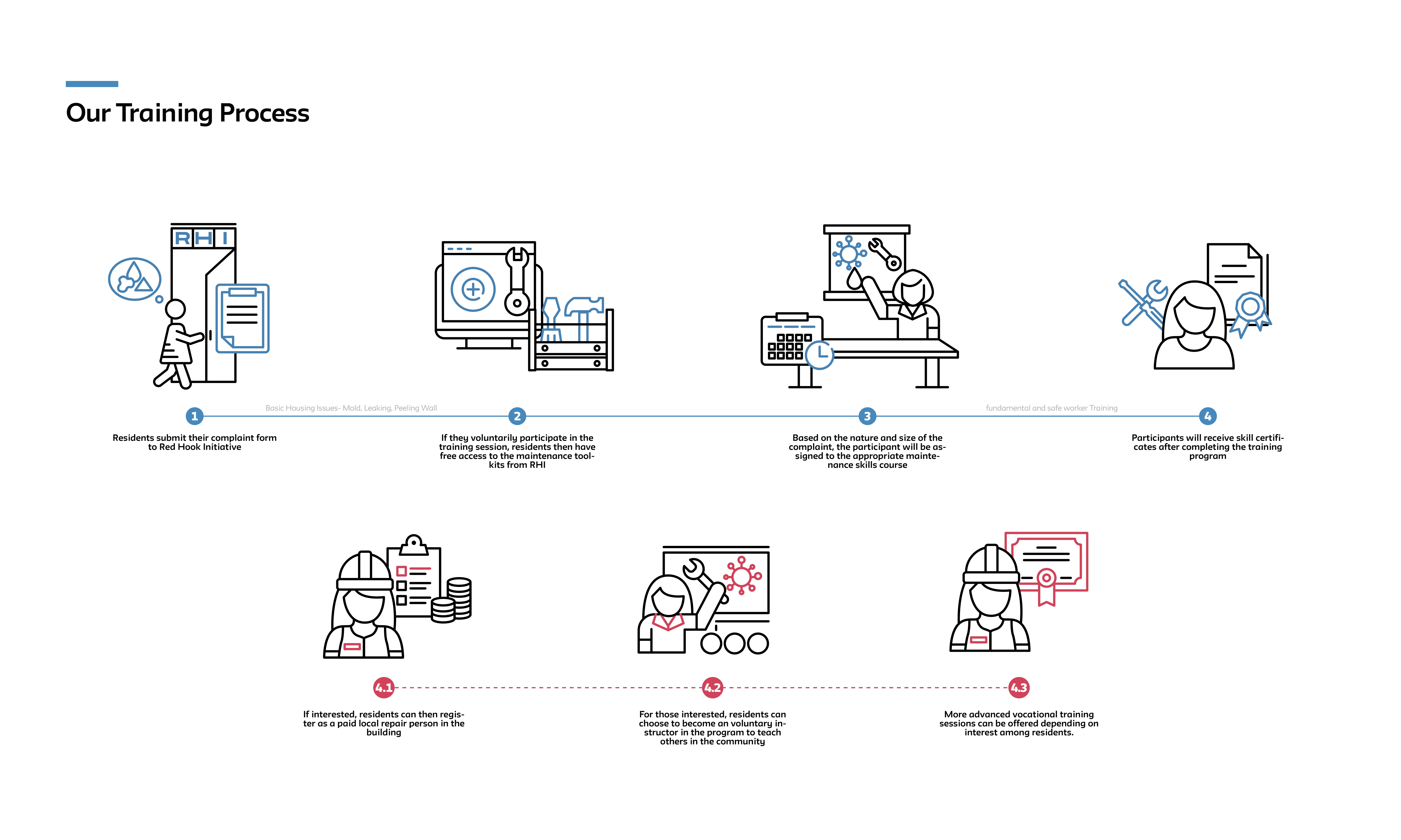 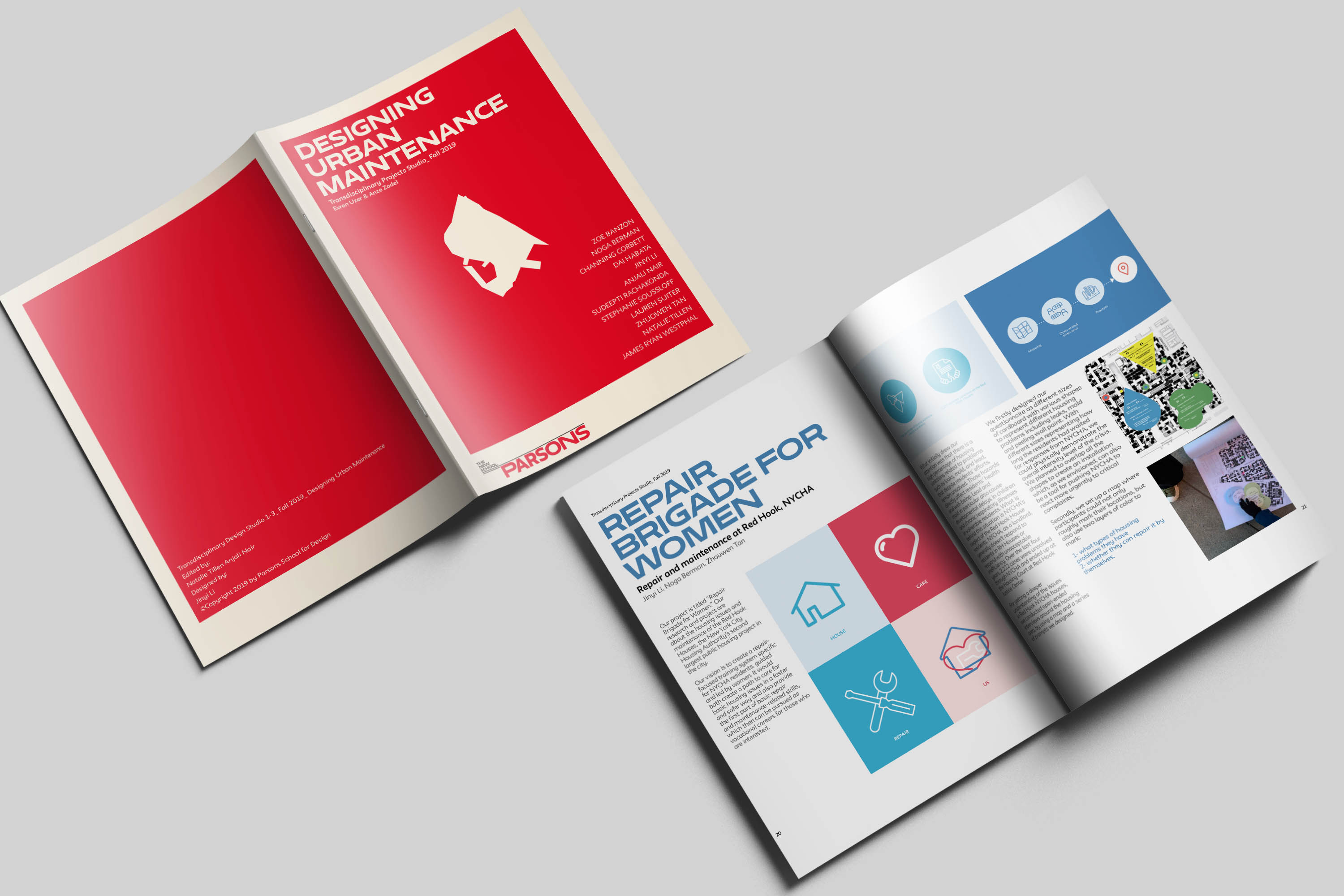 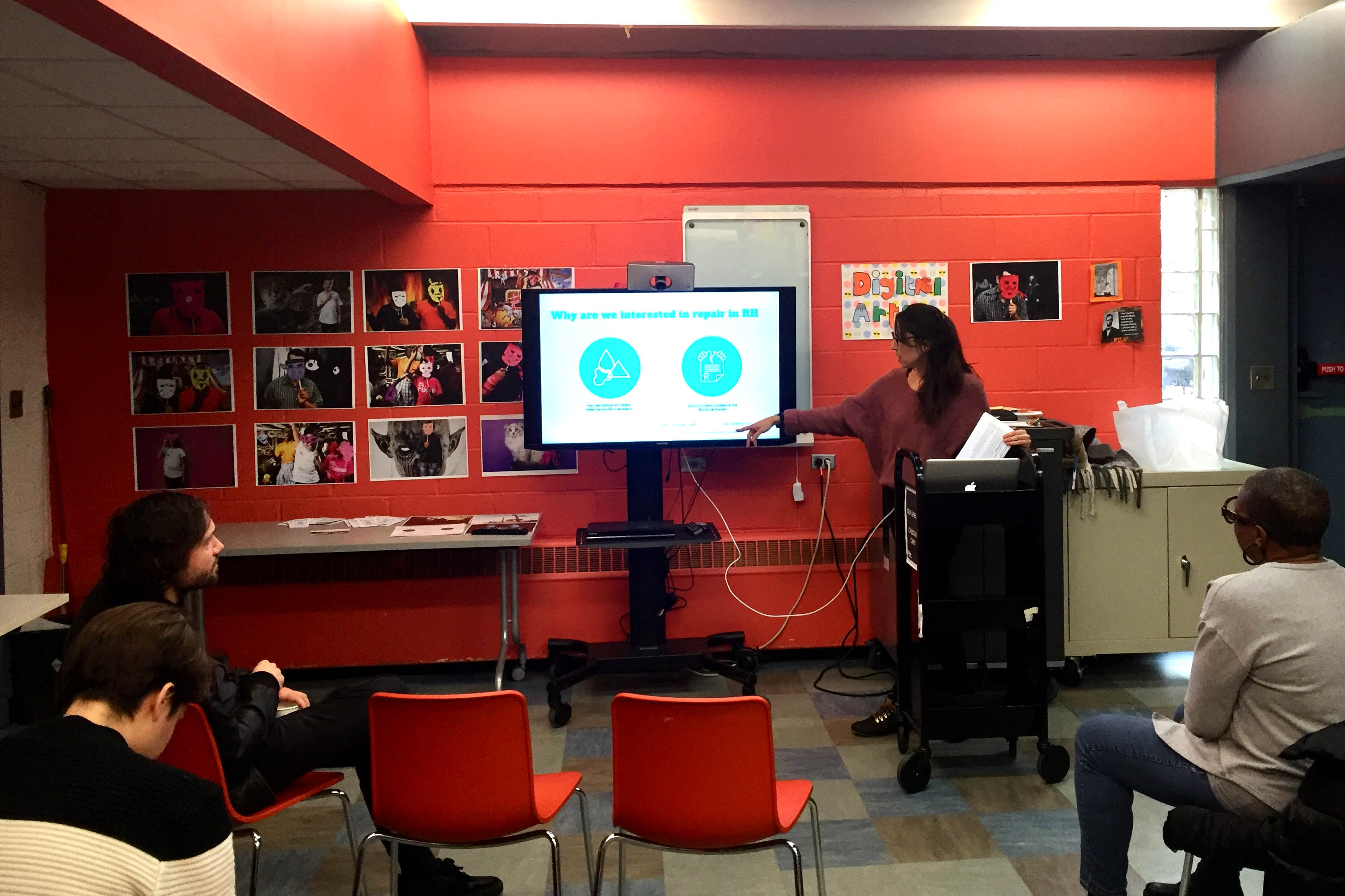 As a part of the Urban Maintenance Studio at Parsons, our team presented this conceptual training proposal in the Red Hook public library in December 2019, for receiving feedback and identifying the alignment from the community. Meanwhile, for being the designer of this studio summary report, I showcased projects from different angles through visual design and made them easy to read and accessible to not just community stakeholder groups, advocacy organizations, but local residents.